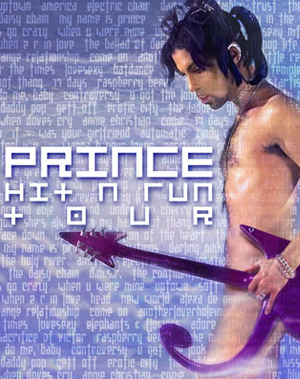 Previous tour
Jam of the Year

Next tour
One Nite Alone... Tour

Give me what I made back to me…

To celebrate returning to his birth name following the expiration of his recording contract with Warner Brothers (31 December 1999), Prince embarked on his first Hit N Run Tour since 1986, to both capitalise on and return to playing live again the hits he recorded when signed to Warner Brothers, those which he refused to play in concert since the early 1990s. Although he was now free from the contract, its legacy meant Prince was still fighting the label over their ownership of his music.

As a result, Hit N Run Tour was essentially a greatest hits show and not in support of any album, however it did serve to hone this backing band for the live recording sessions for The Rainbow Children.

The shows also provided his first opportunity within a few years to tour the USA again, which he did throughout the latter part of 2000 and early 2001. The performances were announced at very short notice, hence the ‘hit and run’ moniker, a move likely due to take the pressure of him to sell out a more formally arranged tour. The tour ran for 30 dates and culminated in a week-long Celebration at Paisley Park Studios, whose doors were opened for a second year, to allow fans to tour the facilities over the seven-day event.

The first Celebration (7 – 13 June 2000) was timed to coincide with Prince’s birthday (June 7th), its guest filled shows – which included Macy Gray, Mint Condition and Taja Seville – furthermore Prince’s interaction with fans, was so well received the event became a fixture for two consecutive years. Prince played the closing show on 13 June, performed at the Northrop Auditorium in central Minneapolis.

The second Celebration (11-16 June 2001) took place shortly weeks the Hit N Run Tour. Prince himself lead fan discussions, which was captured on film by director Kevin Smith, and also premiered The Rainbow Children album. This event was a larger affair to the inaugural year and featured nightly guest performances from the likes of Erykah Badu, Common and Alicia Keys. Prince, however, played six arena shows, this was all that materialised out of a much wider US tour envisaged to run until 8 August.

The third and final Celebration (21 – 27 June 2002) was named Xenophobia and took place right in the middle of the One Nite Alone… Tour. Unlike the two previous years, Prince played nightly at Paisley Park plus held 7 special shows. Panel discussions also took place, with Paisley Park insiders and band members including as Sheila E.