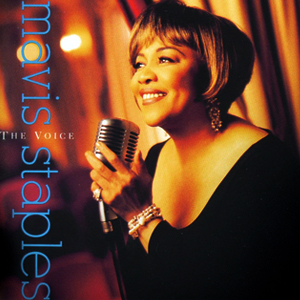 Cool went out the window.

The Voice was Mavis Staples’ follow-up album with Paisley Park Records, the first being Time Waits For No One released in 1989. Prince wrote all but four tracks on the album, which he based on the long letters Mavis wrote him – “On every song on my album, I hear something out of my letters.” and contains the only studio release of The Undertaker, which Prince would only record and later release as a rehearsal for the video of the same name.

The oldest track is Melody Cool, written in 1987 for his aborted 1988 album Rave Unto The Joy Fantastic. Mavis’s vocals were dubbed over it in 1989 and was released as a single as part of Prince’s Graffiti Bridge soundtrack. It was slightly updated for The Voice although was not re-released as a promotional single. Mavis’s vocals for the remainder of the album were added in 1992 at Paisley Park Studios.

Prince was producer for The Undertaker and Melody Cool only, although he performs the instruments for four songs. The title track was co-written by Prince and Rosie Gaines, but the song was passed to Mavis after Gaines quit Prince’s band in 1992. The Voice was released in 1993 on Paisley Park Records, then again in 1995 under on NPG Records with a new song Come Home (5:29) – also written by Prince, added to the tracklist. Her intended third album with Prince never transpired, as their arrangement became a casualty of the dispute between Prince and Warner Brothers.

Prince’s work with Mavis Staples is perhaps and unjustly so one of the least explored corners in Prince’s discography, opposed to other collaborations. Prince worked with Mavis on two albums, both during the Paisley Park Records era. The second collaboration The Voice is the better of the two. Prince holds writing credit for eight of the album’s eleven tracks. The epic title track was written as a collaboration with Prince and Rosie Gaines, the song no doubt went Mavis’ way after Gaines left the NPG in 1992 but Mavis does it great justice. The album heads into full Mavis groove with the gloriously tight House In Order, which has the School Of Rock come Hairspray theatrical vibe. We slow down with the album’s third Prince penned track, Blood Is Thicker Than Time. Throughout the album Prince’s meticulous production standards are wonderfully maintained. The Voice has plenty to offer even to non-hardcore fans. There is plenty that is familiar to the listener; there’s Melody Cool sporting a slight polish from 1990’s Graffiti Bridge, and if You Will Be Moved also sounds familiar, most fans would have come to it via 1-800 NEW FUNK. Mavis’s two Prince covers provide the best tracks. The Undertaker features a full band experience, complete with hornz, and vocals by The Steeles – Sonny T’s bass is blistering. Prince’s version of the song appears on his aborted The Undertaker album. The closing track, Positivity is a terrific cover of Prince’s Lovesexy classic, and Prince’s plays the instruments here also, complete with Dr Fink and Boni Boyer on keyboards. A definite purple stamp of approval.

The Voice is rated 4 out of 5 by Goldies Parade.