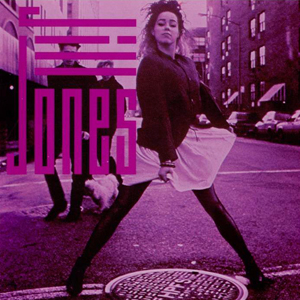 Then there was Jill Jones.

The winter of 1986 and through to the spring of 1987 bookend perhaps Prince’s most prolific writing period. Not only was he working on a double album with the Revolution – their fully completed but abandoned Dream Factory album which Prince then grew into a triple LP named Crystal Ball, plus laid down a solo album named Camille, projects which evolved into his opus magnum Sign O’ The Times, Prince also produced the self-titled albums for Sheila E. and this debut album for Jill Jones. The year 1986/87 was proof quantity did not come at the sacrifice of quality, as this marked the peak of Prince’s creative output.

Jill Jones was introduced to Prince in 1980 by her mother during the Dirty Mind Tour, she later provided vocal support in the live shows of his girl bands Vanity 6 and Apollonia 6 during this and subsequent tours, she and Prince performing off stage out of sight. Jones was as well his casual girlfriend, and had small speaking roles in the movies Purple Rain and Graffiti Bridge. Work on the album started as long ago as 1982, and was recorded between Prince’s home studio at Kiowa Trail, Minnesota. All Day/All Night was recorded live at Prince’s birthday concert at First Avenue on 7 June 1984.

Despite being credited as co-writer of five tracks of this, her self-titled debut album Prince, under the name of Joey Coco, wrote all eight of the songs. Jones’s vocals are also heard in Prince’s 1999 album as well as the B-side Hello, Manic Monday and It’s Gonna Be A Beautiful Night. She is also the muse behind the song She’s Always In My Hair.

The Jill Jones album is critically acclaimed and broadly considered the best non-Prince work to come out from Paisley Park Records. In 2019, Prince’s version of Baby, You’re A Trip with his vocals and outtake originally intended for the album Purple Rain, was released on Warner Brothers’ Originals.

The debut album for Jill Jones is widely regarded as the best non-Prince album to come out of Prince’s Paisley Park Studios – an assumption that is entirely correct. Prince was on a roll in 1987, having been working on no less an album than Sign O’ The Times, he still found time to put together this release, and the quality of the output is mesmerising. Jill Jones was Prince’s former girlfriend, and was one of the very first acts signed to his brand-new personal label Paisley Park Records. Prince wrote all the eight songs for Jones’ self-titled debut album, which starts with the sweeping Mia Bocca – one of the album’s three singles. The playfully saucy G-Spot leads into the big budget Violet Blue and showcases Prince as a master lyricist. It leads then into With You, Jones’ cover of the song Prince released in his own eponymous album in 1979.  The best work on the Jill Jones are the back to back powerhouses All Day, All Night and For Love. After which the pace is maintained by My Man, before this brilliant album is closes with one of Prince’s best songs Baby, You’re A Trip – a deserved hit if there ever was one, and one that encapsulates a sadly much overlooked great from the 1980s, but a release nonetheless still cherished by Prince fans even decades later.

Jill Jones is rated 5 out of 5 by Goldies Parade.