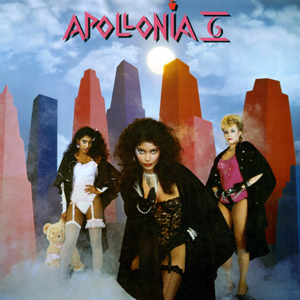 Despite being credited to the band Apollonia 6, all the tracks are written by Prince, as well as performing every instrument. Its 22-year-old lead singer Patrica “Apollonia” Kotero was auditioned, along with hundreds of others, in New York following the departure of Denise Matthews from the band’s earlier incarnation Vanity 6. Kotero subsequently fulfilled Matthews’ role as lead female and Prince’s muse for the movie Purple Rain and afterwards embarked on an acting career under her stage name Apollonia Kotero. She and Prince remained close ever since.

Tracks created for the Apollonia 6 album but never made the cut include the hits The Glamorous Life (which was instead recorded and released by Sheila E. for her debut album) and Manic Monday (given to and released in 1986 by The Bangles), plus Velvet Kitty Cat and 17 Days. Prince disbanded Apollonia 6 following the Purple Rain Tour. Kotero then followed a career in acting. His production credit on the album is under the name of The Starr ★ Company, as he is not credited by name.

Prince even performed the vocals on the album, to give the group singing direction, which Apollonia re-recorded for the final cut of the tracks. Prince’s version of Sex Shooter was released in 2019 by Warner Brothers, in the collection Originals. The album was recorded throughout the spring and the summer of 1983 at Sunset Sound in Hollywood, except for the opening track which was laid down at the Flying Cloud Drive Warehouse studio in the outskirts of Minneapolis.

I wrongly underrated Apollonia 6 for the best part of 30 years. Yes, it has its highs and low points, and it is impossible to tell how invested Prince was in this 1984 project what was essentially intended as the second album for the band’s earlier stocking clad incarnation Vanity 6. Whereas the lead single was Sex Shooter, due to its eyebrow raising segment in the movie Purple Rain, there are still highlights aplenty – four to be exact, out of the album’s seven tracks – a far higher number than I for one originally gave credit. Whilst the stockings have aged badly the (good) tracks have not. To think that Manic Monday and 17 Days were slated for this record, there is still plenty on offer. Its best track is Happy Birthday Mr. Christian – funny enough, Prince jumped from recording this track straight into Purple Rain itself, it enjoys remarkable provenance and tells of a student’s fantasy getting off with their teacher. Prince is also playing the instruments throughout, with occasionally the mighty Sheila E on drums. Prince’s two titillation projects were not taken seriously in music perhaps unsurprisingly, much unlike The Time, Prince’s greatest side-project. Others worthy of honourable mention are A Million Times (I Love You) complete with its addictive hook and instrumental section; the radio friendly Some Kind Of Lover which backed the album’s second of its two singles, and forth worthy track Blue Limousine.