Next
Around The World In A Day

The first album that was jointly credited to Prince and the Revolution, Purple Rain is the soundtrack to the movie and has since remained one of the most successful albums in music history, selling over 14 million copies in the US and 6 million elsewhere. It was largely recorded between the summer of 1983 and spring of 1984, at Prince’s Kiowa Trail home studio, in Chanhassen: except I Would Die 4 U, Baby I’m A Star and the title track, which were recorded at First Avenue and using a mobile studio hired from Record Plant.

Purple Rain originally peaked at number 7 in the UK charts, however bettered that in 2016 climbing to the number 4 spot in the week following Prince’s death.

Purple Rain, Prince’s most successful album, sat at the top of the US album charts for 6 months, and won two Grammies (Best Motion Picture Soundtrack and Best Rock Performance) plus the Oscar for Best Original Soundtrack. The album sold 1m units in the US within a month, and 8m before the end of 1984, and since then certified Platinum a staggering 13 times by the RIAA. The album also received two Grammy nominations, for Album Of The Year and Best Production.

The song Darling Nikki became part of music history, in that it was responsible for the album to receive the first ever Parental Advisory warning, following complaints from the Parents Music Resource Center (a movement founded by Al Gore’s wife Tipper Gore) owing to its ‘filthy’ lyrical content. In 2008, Purple Rain was ranked number 2 in Entertainment Weekly’s best albums ever; 18th in VH1’s best albums of all time, and 2nd in Rolling Stone Magazine’s list of best albums of the 1980s and 8th in their top 500 of all time. Following Prince’s death in April 2016, Purple Rain re-entered the charts at #2 on Billboard and was the highest selling soundtrack album in the US that year.

In May 1984, Prince and the Revolution started recording a follow-up album named Roadhouse Garden, in the warehouse which the band hired at Flying Cloud Drive, Minnesota, to rehearse their upcoming Purple Rain promotional tour. Prince subsequently felt Purple Rain suffered from overexposure and the songs of Roadhouse Garden, which included Splash, Witness 4 The Prosecution, All My Dreams, Wonderful Ass and the title track all sounding too similar to Purple Rain, were abandoned in favour of Around The World In A Day which took a different path, much to the public’s chagrin. In 2015, Prince had the original Purple Rain tapes remastered at Paisley Park Studios, incorporating state-of-the-art sound in the intention to rerelease the album on the 35th anniversary of the original issue. Prince subsequently withdrew his cooperation from the project and the reissue was shelved, albeit until 2016 when following his death. Purple Rain Deluxe was released Warner Bros. Records on 23 June 2017, and contained a companion disk with tracks from Roadhouse Garden.

Purple Rain is doubtlessly the most iconic of Prince’s album covers. The image, shot by Ed Thrasher for the movie poster, captures Apollonia Kotero stood at the top of a short external fire escape stairway, with Prince pulled up on the pavement and sat astride his famous purple motorbike with his trademark love sex symbol emblazoned on its petrol tank. The staircase is part of the backlot of Warner Bros. Studios in Burbank California and was also featured in the Spider Man Movie in 2002, in the scene which Toby Maguire and Kirsten Dunst kiss – in the rain. Because the same image had been used for the movie poster, which was portrait, flowers were added by Laura LiPuma, a graphic designer in Warner’s art department, to turn it into a square image for the LP. LiPuma would lead the art direction for four of Prince’s album covers, the others being Parade, Sign O’ The Times and Lovesexy. 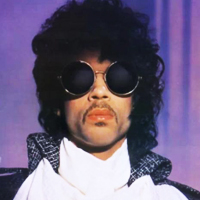 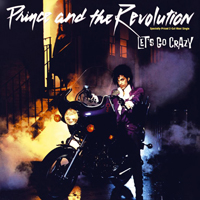 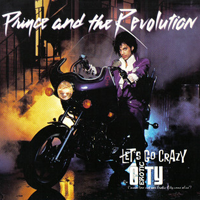 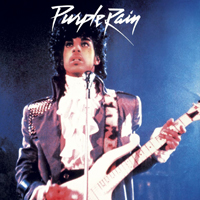 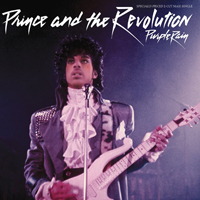 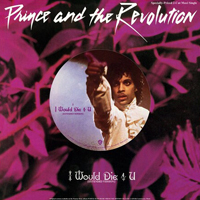 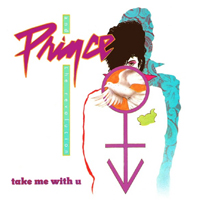 Take Me With U Purple Rain sounds like Prince’s greatest hits album, because that’s exactly what it is. Needing no introduction, it is, to put it bluntly, the template album for musical perfection. 13 times platinum and like it or not Purple Rain contains the greatest and best known work of the 80’s and the album which Prince will always be remembered for. To this day Prince still tries to emulate this level, and to be honest, he never will. Purple Rain contains some of the greatest music of all time and comes from an era when the media talked of the music rather than a tired obsession with Prince’s name changes. With songs like Let’s Go Crazy, Take Me With U, Computer Blue, Darling Nikki (yes the very song which gave birth to the Parental Advisory warning), When Doves Cry, well, actually, every track on this album, makes it the definitive album of a decade. Although I am not an old-school Prince fan, here one has to give in, and accept music simply does not come better than this. Purple Rain is and always will be the essence of Prince. Essential in any music lover’s collection.

Purple Rain is rated 5 out of 5 by Goldies Parade.