Next
Nothing Compares 2 U

It’s nice that it sounds better for the fans but I live in the now. I don’t have to go backwards to celebrate.

Purple Rain Deluxe was intended to be released in 2015 as a remastered version of the 1984 album, to mark the 30th anniversary of the original album’s release. Working in collaboration with Warner Bros. Prince supervised the work to remaster the album, which was completed by Joshua Welton at Paisley Park Studios in 2015. A second disk, containing extended cuts and mixes was expected to accompany the release in April 2015, however Prince withdrew his cooperation from the project because Warner wanted to accompany these with an additional disk containing previously unreleased outtakes from the period.

Purple Rain Deluxe was revisited following Prince’s death in April 2016 and the third disk containing previously unreleased songs from the era was added to the set. The highlights of vault disk, are the fan favourites Electric Intercourse – originally intended for the Purple Rain soundtrack but replaced with The Beautiful Ones – and Possessed (another outtake from the original album). All the vault tracks are formed of the key and long sort-after outtakes from the Purple Rain era (1983/84), many of which recorded in the studio sessions held at Sunset Sound in Hollywood, and Prince’s warehouse facility at Flying Cloud Drive, Minnesota.

The set was available in two editions: Standard of which contained the original remastered album and disk two, and the Expanded Edition comprising all four disks (the vault disk and a DVD containing the restored version of Prince and the Revolution Live! a concert from the Purple Rain Tour that was previously available in VHS format in 1985, plus 36-page colour booklet). Purple Rain Deluxe is the first of the series of which was subsequently up-scaled to Super Deluxe packages.

Disk 2: From The Vault & Previously Unreleased

1 Co-written with John L. Nelson.
2 Our Destiny, sung by Lisa Coleman.
3 Intended for release on the aborted album Roadhouse Garden.

It had taken a fraction over a year to achieve but here is the release of the first songs that would never have seen light of day had Prince still been alive. There are three CDs in this release (actually, a fourth disk – a DVD from the Purple Rain tour – is also generously included); the first being the remaster, done under Prince’s supervision back in 2015 (intended for release to mark the 35th anniversary of the original album but later pulled). Yet it’s the accompanying disks giving the reason to own this. The second disk is where fans head to first, for it contains the music previously unreleased – some of which being treasured jelly indeed. Beyond the much longed for The Dance Electric, Electric Intercourse and Possessed the real find is the full 12-minute version of Computer Blue and a fabulous We Can F**k. The set demonstrates the many faces of Prince range – from frivolous (Velvet Kitty Cat) to masterful (Father’s Song), funky (Wonderful Ass) to irreverent (Love And Sex). Although not equalling the quality expected from the Revolution, that and the sound issues reminds us these tracks are clearly and correctly a collection of outtakes. But with sound issues aside, this remains a solid collection, nonetheless. The only let-down is its quality of sound, as is understood this is due to that the recordings being taken from recordings rather than the master tapes (locked behind legal red tape) themselves. The standout tracks are surely Our Destiny, Computer Blue and We Can F**K – where Prince’s dexterity comes as such ease it astounds – and continues to do so with Father’s Song – during which listeners must remind themselves Prince was a mere a 24-year-old at the time of its recording in 1983. Sadly, the condition and storage of these tracks, camped in a dusty corner in Warners for more than 35 years, despite their remastering still bear the stamp of bootleg sound quality even with an official release. Comprised of edits and b-sides disk three is the one least expected to enjoy, it however delivers the surprise result from the rest the package. The extended Another Lonely Christmas is the highlight of the entire set and although placing the same song back to back, despite one being the edit and the other the extended version – done no less than five times across the disk – is irksome over repeated listening. The package is a wonderful revisit to 1984, the year that (is although not his most prolific or greatest) is etched in history as its creator’s most definitive, the set goes a long way to celebrate Prince’s industry-shaping talent. Should Warner ever follow this up with Sign O’ The Times Deluxe shall things become serious.

Purple Rain Deluxe Edition is rated 4 out of 5 by Goldies Parade. 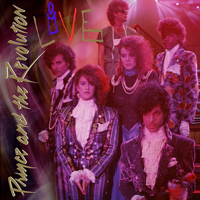 Prince And The Revolution: Live