Planet Earth is too good to be so lightly sold.

Copies of the Planet Earth album were given free in the UK as a cover-mount with the UK’s Mail On Sunday newspaper on 15 July 2007, and later to every attendee at The Earth Tour at London’s O2 Arena throughout that August and September.

Three of the album’s tracks were recorded at The Rio Las Vegas in the spring of 2007, during his four month residency at Club 3121 where Prince was performing a stint of revue shows as rehearsal for The Earth Tour. The remainder of the album was laid down at Paisley Park throughout 2006 and into the early part of 2007.

Originally intended to be released on 24 July by Columbia Records, because of its earlier free distribution and its resulting ineligibility to chart, Planet Earth was only commercially available outside of Britain since many fans already owned a free copy. In result British music retailer HMV took the highly unusual step to sell the newspaper in its stores to make the album available to their customers.

Planet Earth peaked at number 3 on the US Billboard charts, retailing 96,000 units that week. The single Guitar is a re-working on an earlier version released on 3121.com. The track Future Baby Mamma won Prince his 7th and final Grammy Award, for Best Male R&B Vocal Performance of 2007. Planet Earth was reissued by Sony Music / Legacy Recordings on 8 February 2019, faithfully maintaining the original’s hologram on the cover.

The cover of the retail release version of Planet Earth features a lenticular hologram that reveals Prince’s trademark Prince love symbol over the main artwork, a photo of Prince by Afshin Shahidi. There is speculation whether Prince is wearing a corset in this photo. This is the second hologram cover to appear on his albums, his first was for Diamonds And Pearls in 1991. 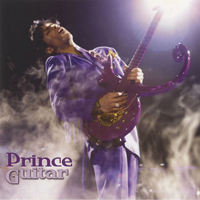 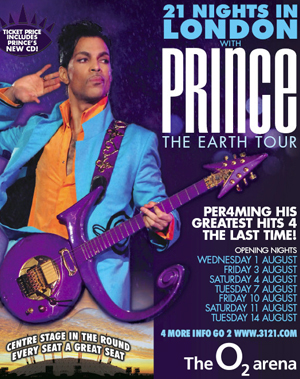 Given away totally free in the UK, no other Prince album received as much media attention since Purple Rain. Planet Earth spawned a new first for the music industry, in that it was an album that supported the tour. His “Best in years!” critics claimed. Planet Earth is a typically varied Prince outing, showcasing his legendary diversity through many genres: rock, funk, rap and soul. The title track gives it the mark of quality with haunting, yet theatrical, scope. Guitar sets the pace before slowing up with Somewhere Here On Earth reassuring the listener into an album that boasts quality. Old habits die hard in The One U Wanna C, which sees Prince talking his woman into bed with the proposal to “come like thunder”. Resolution (providing the cheese) and Lion of Judah form nice simple old-style harmonies that fuse both maturity and playfulness into Planet Earth. Prince retains his position as master of ballads with the Grammy winning Future Baby Mamma – superior as any in his career. Mr. Goodnight soothes where Prince provides a silky dreamy rap. The highlight of the album is Chelsea Rodgers, his funkiest in track in recent memory. Prince’s chessyest (possibly ever) is provided in Resolution – “The main problem with war”, notwithstanding there are actually many greater problems with war, can this lyric really have come from the mind that gave us Sign O’ The Times. Overall Planet Earth offers scope and maturity, whisking the listener on a journey of absolute quality, so rare a trait found this day and age. “So shall it be written, shall be sung” Prince is clearly showing it is 2007 which marks his prime, not 1984. Planet Earth is made all the more sweeter as a freebie, but I am sure fans would have more than happy to fork out a few pennies for this solid entry into Prince’s catalogue.

Planet Earth is rated 4 out of 5 by Goldies Parade.