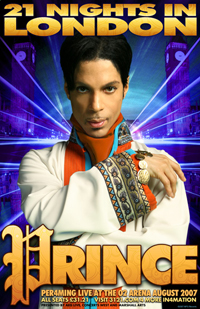 One of the most exciting showmen on the planet.

This was an entire Prince ‘tour’ performed at a single venue, the newly opened O2 Arena in London. This was a high risk strategy for any artist to commit to and fill a 23,000 capacity venue, 21 dates in a row. However, exceeding expectations all 21 shows were sold out.

Officially named The Earth Tour, after the Planet Earth album which was given free to every attendee of the shows, it was also billed as 21 Nights In London and performed in the round on a Prince Prince love symbol symbol-shaped stage. It was also a revue show in a similar format to the preceding residency shows he played in Las Vegas at the purpose-built Club 3121. The London arrangement possibly came out of seeking a big name artist to inaugurate The O2 Arena as a new music venue, and Prince achieving similar success in his Las Vegas stint.

Each night after the main event an after show concert or party took place in an adjoining club IndigO2, specially renamed 3121 IndigO2 for the duration.