20Ten was recorded at Paisley Park Studios between late 2009 and early 2010. The release of the album is unconventional in that it is distributed exclusively through five European newspapers as a free covermount, on 10 July 2010 in the UK (2.5 million copies shipped) and 22 July in France and Germany.

I just think it’s a year that really matters.

The UK edition was distributed by the Daily Mirror newspaper, whom noted an increase in copies purchased that day of 334,000 extra sales. Upon striking the deal for 20Ten Prince was relieved: “no charts, no internet piracy and no stress.” The format was adopted for a wider distribution though similar deals with five European newspapers owing to his previous success with Planet Earth which too was a free covermount in the UK, under an arrangement with the Mail on Sunday newspaper in 2007. Prince did tour 20Ten, albeit he performed songs from it on the festival circuit. It was during this tour, in June 2011, Prince declared he had ‘no plans’ to record another album again.

20Ten was intended for retail distribution in the US through Warner Brothers Records as 20Ten Deluxe, a project which had evolved from an earlier unreleased studio album named Welcome 2 America. However the plans did not come to fruition and was therefore never available in the US.

By Prince standards 20Ten is mediocre, however, and yet bizarrely, Laydown, the standout track of the album, is hidden as track number 77. 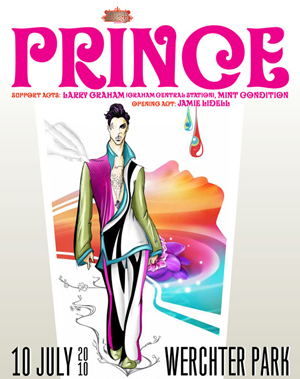 20Ten is about pleasant beats rather than forging new ground. Prince was never going to split the atom with 20Ten, but it still shows Prince is honing his sound in his homage to the Linn drum machine, right from the off with the excitable opener Compassion. 20Ten is heavy on technology, low on guitar and with flavourings of backing vocals and anchored by trusty old Hornz. Afterwards we move to Beginning Endlessly, a punching, funk-fuelled track showcased Prince’s craftsmanship remains as sharp as we expect of any of his music. As ballads go Future Soul Song is a true highlight. Sung, unusually, out of falsetto, Prince’s deep voice pulls this writhing beauty of a song that will find you cranking up volume and reminiscing ’96s The Most Beautiful Girl In The World. 20Ten regains tempo with the bouncy although sadly average Sticky Like Glue and Act Of God before heading back to 1980s synths with Lavaux closing the chorus-friendly middle section of 20Ten. In the back half it closes with Everybody Loves Me, a happy but again average electro track, though with a little patience comes the reward, the hidden track, Laydown. Rocky, hard-edge and swathed in a truly fantastic driving beat Laydown seems an afterthought but brings life to and an end to a not totally exciting but competent 20Ten with aggressive and gorgeously arrogant form. But is Prince listening to too much easy listening radio? Should he not want appeal to the under 30s market? Full of oddments and considering the success of recent albums, fans expect more Prince in their Prince albums.