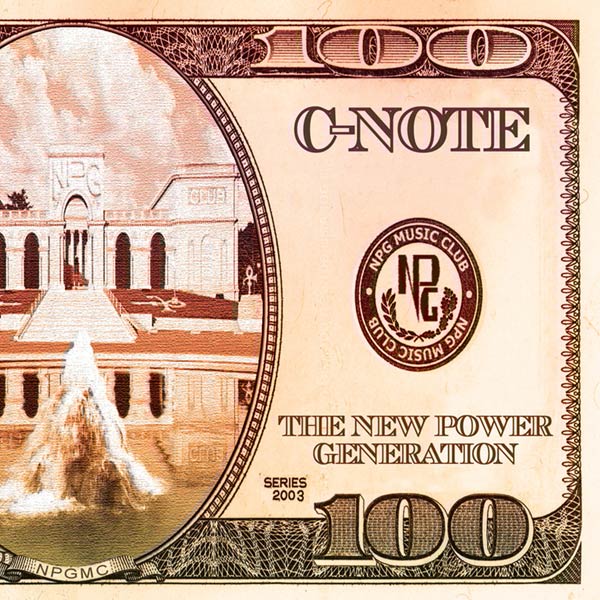 C-Note is a digital album comprising of five live recordings taken during the One Nite Alone… Tour during the pre-concert soundchecks attended by NPG Music Club members at shows performed between 25 October to 29 November, 2002. C-Note was released as five MP3s from Prince‘s official website npgmusicclub.com, individually available, on 3 January 2003 and later as a downloadable album on 29 March 2004 – it was therefore ineligible to chart as a conventional retail release.

The first four tracks are instrumental soundchecks from the tour and named after the cities from where the performance was recorded. The original version of the first track Copenhagen contains a 3-minute and 20-second homage to Miles Davis but was edited out in the in the full C-Note release. This was recorded on 25 October 2002 at Falconer Salen, in Frederiksberg, Copenhagen.

The fifth track is the only officially released recording of the fan favorite outtake Empty Room, a song that dates from 1985. Whilst no studio recording of Empty Room has ever been released, the track was originally intended for the aborted second Revolution album Roadhouse Garden. The version on C-Note is also recorded live and during the soundcheck ahead of the Falconer Salenin show in Copenhagen on 25 October 2002.

Together, the first letter of each of the five tracks spell C-NOTE – the nickname of an American $100 bill – and the fee for a lifetime subscription to the NPG Music Club.

It was at this point in 2003 which marked a crossroads, where Prince almost lost his way. It was a strange moment in his career. An era fans want to remember both fondly and not at all in equal measures: the One Nite Alone Tour was probably his best, but his then lackluster jazz fizzed offerings Xpectation and N.E.W.S. are the worst pages in Prince’s discography. It was this stark contrast that seemed to reveal Prince’s inner demons, where on one hand in concert he was growing and heading into deeper more meaningful musical experience but in the studio his talent was regressing. Prince was clearly at odds with himself, where on one hand fervently believing music should be artful if it is to be done properly. And was prepared to make his fans suffer for this art like it or not. C-Note was taken from four sound checks during the tour, which will make future listeners wonder why the ONA tour became the fabled experience fans still revere. But for this music the fans were not ready, they sought in Prince more Andy Warhol than Thomas Gainsborough. It was a fact even Prince could no longer ignore and on C-Note slotted in the classic Empty Room which will be your only reason for finding and playing this album again and again. Let there be no doubt he would see the light and hurriedly follow up with Musicology in 2004. There is lesson to be learned from that because having reinvented himself and kept his music commercial Prince has not looked back since.

C-Note is rated 2 out of 5 by Goldies Parade.