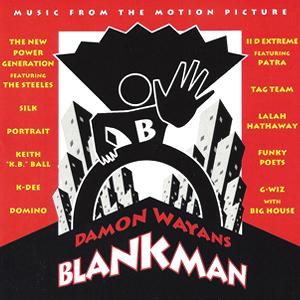 Give us what U give your brothers then U’ll understand

Super Hero was written by Prince in September 1992 and performed with Earth, Wind & Fire for their 1993 album Millennium (released on 14 September 1993 on Warner’s Reprise imprint).

Prince recorded his own version of the song at Paisley Park Studios in the summer of 1994 and credited it to The New Power Generation, for inclusion into their album Exodus but was dropped from its final track list. Super Hero was instead included into the soundtrack to Mike Binder’s, Columbia Pictures movie, Blankman. The movie, a spoof on the super hero genre, is about a man (played by Damon Wayans) who is a childlike genius who invents gadgets out of items of junk and eventually manages to make his clothes bulletproof and decides to become a low cost super hero.

The song Super Hero was released as a single on the same day as the full soundtrack album (9 August 1994). This version of Super Hero is the sole Prince track on the soundtrack album and is sung by The Steeles (Jevetta, JD, Fred and Jearlyn Steele), however Prince (then under the name Prince love symbol) sings backing vocals and plays the drums and keyboards. Sonny T is on bass, and Tommy Barbarella and Morris Hayes are playing the keyboards.