Do you think today’s music will last?

Welcome 2 America offers a prime example of Prince losing interest in a project and moving on to the next. This full studio album was recorded during the spring of 2010 at Paisley Park Studios and was planned for release sometime in 2011 to accompany his 2010/11 tour also named Welcome 2 America. Prince continued with the tour but chose not to pursue the album, opting instead to release the subsequent project, 20Ten, in its place. Welcome 2 America was locked away into the vault and became known as the “lost” Prince album.

The eventual issuing of Welcome 2 America marks Prince’s first previously unreleased studio album to receive an official release since his death in April 2016. The album is issued by Sony Legacy as two editions; Standard (the main 12-track album) and Deluxe (the studio album both in CD and double vinyl LP formats packaged together and with a Blu-ray disk plus a 32-page 12″ book).

The companion Blu-ray disk features a full concert filmed on 28 April 2011 at The Forum, in Inglewood, California, during the Welcome 2 America Tour and as part as his stint at the venue billed as the 21 Nite Stand. An accompanying single containing a live medley of Welcome 2 America and Dreamer is a recording from a concert performed on 14 May 2011, likewise at The Forum for the same tour.

Prince co-produced Welcome 2 America with his longest serving band member Morris Hayes, who also plays keyboards on the title track. The title track is a social commentary of present day America. The song 1,000 Light Years From Here is the original version as intended for this album, although was previously released in 2015 and mixed into the end of Black Muse in the final album Prince released during his lifetime, HITNRUN Phase Two. A slightly shorter version of the track When She Comes was also included into the track list of that 2015 album, but on Welcome 2 America features a piano in place of the accordion.

The cover, a shot by New York photographer Mike Ruiz, pictures Prince holding a Cleo “bow” bass guitar made of wenge wood, built at the workshop of Luthier Jerry Auerswald, in Germany. This photograph was used to promote the Welcome 2 America Tour and although is the same photo intended for the original album, the 2010 version of the image included the New York City skyline as the backdrop depicting America. 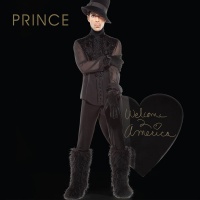