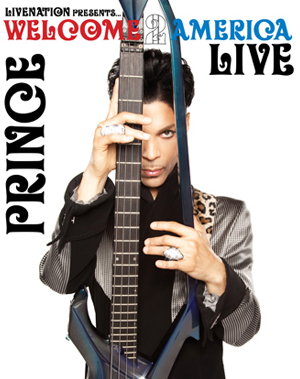 Next tour
Live Out Loud Tour

No concert is ever the same.

Essentially a run of several tours under the banner Welcome 2 America, despite it’s name evolved into a world tour – likely driven by its continuing success. The tour was originally announced by Prince in person at the Apollo Theatre, New York on 14 October 2010. When the Welcome 2 America Tour began that December, the event marked Prince’s first American tour for 6 years. This phase of the tour would eventually gross $20 million.

Renamed Welcome 2 Canada the Canadian leg marked Prince’s first shows in the country for 11 years. After which it moved to the European festival circuit (still under the moniker Welcome 2 America) and then to Australia and renamed Welcome 2 Australia. These tours were a ‘greatest hits’ format and not in promotion of any album.

This tour is noted for seeing Prince’s first and only appearance at a UK festival, The Hop Farm. Having chosen this fairly unknown festival ahead of the expected candidate Glastonbury, the latter had used Prince’s name in the past under the hope to entice him as its headlining act. His choice for an unknown festival was therefore a snub to Glastonbury, however his appearance was a coup for The Hop Farm and put the event on the map as a serious festival. Knowing the exposure it would give the organisers, Prince’s fee for was $1m and was known as the “million dollar show”.

The other festivals he headlined during this tour was Heineken Open’er Festival (Poland), North Sea Jazz Festival (The Netherlands), Sziget Fesztival (Hungary), Way Out West Festival (Sweden), plus two dates at the specially named NPG Music and Arts Festival (Denmark).

A full studio album was originally intended to accompany the tour, Prince produced a 12-track album named Welcome 2 America in 2010 but decided to release 20Ten in place. The Prince Estate released the original album, as Welcome 2 America Deluxe Edition, in July 2021.