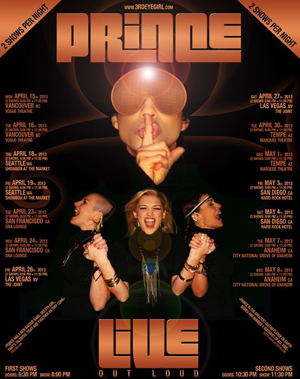 Next tour
Hit And Run Tour

A perfect collision of the planned and the unplanned

This was a series of stripped-down concerts performed initially along the west coast of North America. The Live Out Loud Tour was performed with two shows nightly by Prince and his newly formed all-female backing band 3rdEyeGirl.

The tour was preceded by performances held at the Dakota Jazz Club in Minneapolis on 16, 17 and 18 January 2013 to serve as warm up for a more fully formed tour. The shows were played at small capacity venues (approx. 800 cap.) as these were better suited to the style of traditional grass roots rock events, as was the flavour of 3rdEyeGirl.

After 25 May, the Live Out Loud Tour ended and evolved into a summer tour comprising of a series of one-off and short notice concerts at European festivals and clubs.