Home » Prince Discography » Compilation Albums » We Are The World 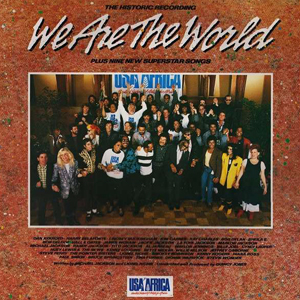 We Are The World © 1985, Columbia Records
BUY ON AMAZON

We Are The World

I tried to tell them that I didn’t want to sing. But I’d gladly write a song instead

4 The Tears In Your Eyes is written by Prince and performed by Prince & the Revolution for inclusion into the US fund raising album We Are The World. Prince was unable to participate in the main single’s recording due to scheduling commitments for the Purple Rain Tour and instead performed his own specially written song as his contribution.

The song was recorded outside the New Orleans Superdome, the location of tour at that time, on 2 February 1985 during a free day on tour, using a mobile studio set up outside. The footage of this performance was televised on the night of the LiveAid concert. It is also Prince’s first contribution to a compilation album.

An acoustic version of 4 The Tears In Your Eyes was later released on 13 September 1993 on The Hits / The B-Sides triple album, the same CD on which Hello also appears. Due to his non-participation at LiveAid Prince wrote Hello in response to the negative press he had consequently received: “We’re against hungry children, our record stands tall, but there’s just as much hunger here at home” he sings in Hello. Hello was a non-album track originally released as a B-side to Pop Life on 10 July 1985.

1 Written and produced by Prince. Performed by Prince & the Revolution.