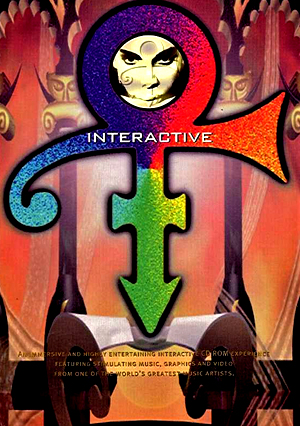 Is it a game? Is it an aural puzzle? Or is it a musical experience?

Interactive is a CD-ROM video game which contained six songs as well as four music videos of which Prince recorded in June 1993 at Paisley Park Studios. Interactive is essentially a computer game that requires the player to navigate through a virtual 3D tour of several rooms within a make-believe villa (the Foyer, Studio, Library, Grand Hallway, Dance Club, Boudoir, Virtual Video Room and the Candle Room) to solve eleven puzzles to locate five pieces of the Prince love symbol. The real aim was to unlock the previously unreleased material.

The concept came about when Prince (then under the name of Prince love symbol) was exploring alternative avenues to distribute his music, since he was locked into a dispute with his record label Warner Bros. that led to the closure of his own label Paisley Park Records in 1993.

Interactive contains a total of 52 audio clips and 31 video clips and facts about Prince and his albums (1979-1993) as well as snippets of interviews with Eric Clapton, Little Richard, George Clinton and Miles Davis talking about him. The video game was released on Prince’s birthday and during the Interactive Tour. It’s title track, Interactive was later re-released on Crystal Ball in 1998.

Prince love symbol Interactive is a journey through an incredible 3D playground of multimedia. You begin this adventure with a preview of the powerful new video of the song Interactive. written by Prince love symbol specifically for this CD-ROM release. From there, your objective is to interact with anything that strikes your fancy. Prince love symbol Interactive is not so much a game as it is an opportunity to explore, discover and be entertained. There are samples of close to one hundred pieces of music and video interlaced with thousands of 3D graphics. (Not all elements are interactive, but you must explore completely to experience all of this fun-filled and media-rich material.)

Whatever path has taken you here, you are now part of the exciting world of Interactive Music on CD-ROM. This disc attempts in all ways to push the envelope of interactive multimedia with stunning 3D graphics, state-of-the-art audio and exciting video. All that is required is a willingness to play. There are games and puzzles in Prince love symbol Interactive in which you can mix music, unscramble videos, play DJ, VJ and more. All Encased in a dynamic 3D environment filled with ambient music, morphs, challenges and surprises. These encounters involve the unique style of Prince love symbol and may take some more experimentation to solve. Your task is to look to the details and clues around you and use your imagination. The journey is its own reward!

1 CD-ROM game contains five full length songs, two of which were previously unreleased at that time.