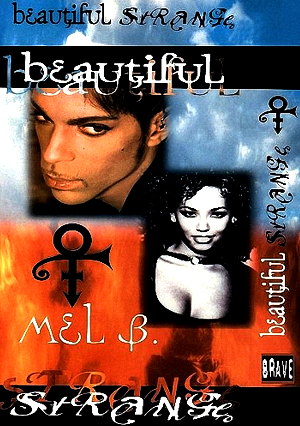 Beautiful Strange is a television special screened in the UK by Channel 4 on 24 October 1998. The programme is split into two sections. The first part begins with a video to the song Beautiful Strange (a remix of the track was also released on Rave In2 The Joy Fantastic on 29 April 2001 limited edition CD). Afterwards Prince is interviewed at Paisley Park by former Spice Girl, Mel B., filmed on 30 July 1998.

The second half comprises of a special concert filmed at the Cafe De Paris nightclub in London which took place on 28 August 1998 during a break on the Jam of the Year Tour. The interview, programme and concert were released on VHS under the name Beautiful Strange through the NPG Music Club on 24 August 1999. It was not, therefore, commercially available.

Listen … This intimate conversation between Prince and Mel B. [of Spice Girls shame] covers the subject of musical inspiration, freedom, and influences. At home in his Paisley Park Studios, Prince gives one of his most revealing interviews. Musical legend, accomplished composer, and consummate performer, Prince is a multi-layered artist, whose years in the “corporate business” of the music industry serve as insight for other performers as they are faced with signing away their artistry. His experience enables future acts to hold on 2 their creations and to freely express themselves in an artist-driven market. Stay tuned, cuz after the interview you will be witness to forty nine minutes of a special performance.