Dirty Mind was written immediately in the wake of Prince’s stint as the support act for Rick James’s Fire It Up Tour. It was recorded during the spring of 1980 in the basement where Prince had set up a studio at the home he was renting from September 1979 at 680 North Arm Drive, situated near Lake Minnetonka. Dirty Mind was crucially Prince’s first album recorded in Minnesota and gave rise to his trademark ‘Minneapolis sound’.

Overt examples of quite disgusting immaturity.

Unlike his first two albums, Prince is accompanied by band members, providing vocals and instrumentation on the title track and Head, and writing credits are shared on the title track and Partyup. Dirty Mind sold 500,000 copies (eventually receiving RIAA’s Gold certification on 20 June 1984) and climbed to 45 on the Billboard chart yet was viewed as a disappointment by Warner Brothers – failing even to chart in the UK. However, Dirty Mind did eventually get into the UK charts in 2016 in the week following Prince’s sudden death, reaching position 61.

The track Partyup contains a groove created by Morris Day when using Prince’s North Arm Drive home studio. Prince liked it so much he offered Day a choice: either $10,000 cash or help to get a record deal. Morris chose the record deal and The Time was created out of this pact. Like with his early side-projects, Prince hid his production involvement behind his first pseudonym, Jamie Starr – who received its first use as the engineering credit for Dirty Mind.

The album received critical acclaim and was later listed by Rolling Stone Magazine 204th in their rank of top 500 albums of all time. The sexual tone of Dirty Mind caused great division among its band members and critics alike, it was racy because Prince was at the time single and in want of female company. Its highly erogenous lyrics was not to everyone’s taste for the time. It is believed Prince’s elder half-sister, Sharon Nelson, was the inspiration behind the pro-incest song Sister.

Prince told his photographer Allen Beaulieu that he wanted to be pictured laying on a bed for the cover shot for the Dirty Mind album. Beaulieu instead found a battered old box-spring bed frame, which he upturned to use as the background for Prince to stand in front, producing this iconic photo. 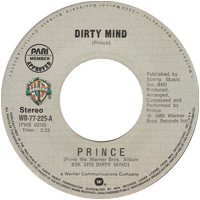 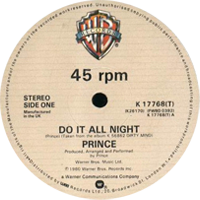 Do It All Night 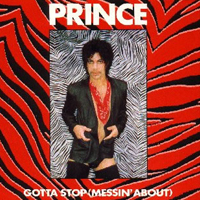 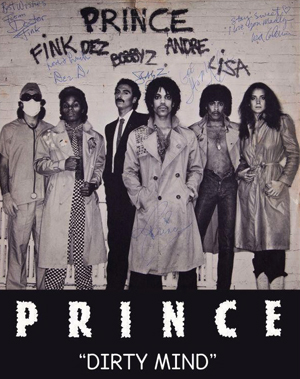 After two albums to get his footing on mainstream music by the third album Prince casts loose his moral devil and tells all what fascinates him most. Women. Frankly if you really want to find out where Prince’s musical roots stem from they don’t shine through better than Dirty Mind. Funk is what Prince really does best and he churns it out in abundance here. Prince comes clean and names the album after the only thing on his mind – lewd filth. He layers plenty of smut into every grooves and lyric, from the title track to Do It All Night and Head. All alone and horny, Prince gets melancholy with When You Were Mine and Gotta Broken Heart Again but thankfully goes out partying again in Uptown, gets hitched and back into bed, even pausing for foreplay with Head. Prince even indulges in incest with Sister but ends up all elated with Party Up and ready to denounce that “fighting war, is such a f*ing bore.” Dirty Mind was considered tasteless and crude back in the day but what it had achieved was to shape the sound of the Minneapolis music scene and the world of music has never been the same since.

Dirty Mind is rated 4 out of 5 by Goldies Parade.