A blog from a Prince fan’s perspective

Archived Commentary can be found here. 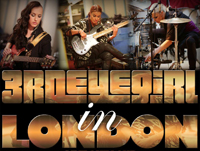 COMMENTARY By Goldies Parade on 5 February 2014

You might be forgiven for thinking a newcomer to social media could within one year score an absolute coup, not only above the biggest TV event of the year, but for causing quite a stir for a tour that’s had not a penny of advertising spent on it.

COMMENTARY By Goldies Parade on 28 November 2013

Although a latecomer to the party, Prince has really gotten into social media of late, with @3rdeyegirl. Tantalising fans with all manner of exciting prospects of new songs, live streams from Paisley Park

COMMENTARY By Goldies Parade on 21 December 2008

Being his 30th year in the business, for Prince 2008 was a rather mooted affair, spending it cooking up another project, a so far unnamed release for 2009 from which 4 tracks have be aired on radio in what promises to be his most critically acclaimed outing since Sign O’ the Times. Maybe.