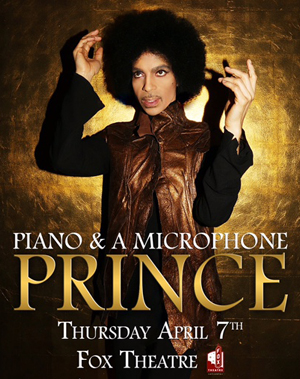 You have to try new things. With the piano it is more naked, more pure.

Being that all his previous tours have met with critical acclaim, Prince decided that for this tour, the solo Piano & A Microphone Tour he would develop a new format instead of the regular power shows he otherwise performed with the support of a band.

The Piano & A Microphone Tour was just that – simply Prince, a piano and a microphone. It was played only in theatres and its stripped down format provided a highly intimate experience both for Prince and fans alike. Prince, who was reflective as was at the time writing a memoir, used the shows to talk to the audience and reveal personal and sometimes previously undisclosed experiences of his life, particularly his relationship with and the influence of his father on his music. Its introspective content proved further poignant as this tragically became also his last ever tour.

The Piano & A Microphone Tour was premiered at Paisley Park Studios on 21 January 2016 and one month later was launched as a world tour. The tour was originally intended to begin in Europe the previous December, but the entire European schedule was postponed in the light of terrorist attacks which had occurred in Paris on the same say the ticket sales for its first shows opened. The tour was instead transferred to Australia and postponed to late January, and played his first ever shows in New Zealand.

The tour then switched to America and was performed in Oakland and Atlanta. After Atlanta the tour was planned to call at St Louis, Nashville, Washington DC, Miami and Minneapolis, then head to Europe to fulfill the previously cancelled leg. But the tour was tragically cut short.

Its two shows scheduled in Atlanta on 7 April were postponed to the 14th because it was revealed Prince was fighting a severe bout ‘flu’. Despite performing these rescheduled shows and following his return to Minneapolis he suffered a seizure on the return flight, and suffered a relapse at home on 21 April. Emergency services were called, but they were unable to save him. Prince was pronounced dead that morning.