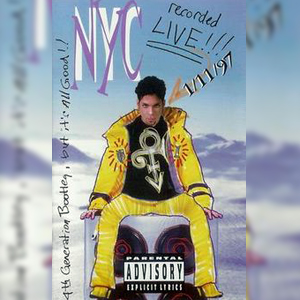 NYC Live! is two songs recorded from Prince’s concert at the Roseland, New York City on 11 January 1997, and was sold initially at the Prince concerts performed during the summer of 1997 for his Jam of the Year Tour, and later online through 1800newfunk.com in cassette format only (both sides containing the same two tracks). NYC Live! is intended to have the appearance of an unofficial recording – bootleg.

The release of NYC Live! by NPG Records instead of EMI, which was the distributor of Prince’s current album Emancipation, is likely since promotion of that album had stopped due to EMI’s bankruptcy, and NYC Live!, albeit on cassette, was Prince’s desire to continue the album’s promotion.